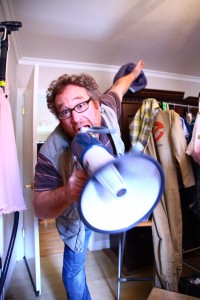 Roger Roth began his filmmaking career at the age of 11 in Phoenix Arizona after discovering his sisters super 8 camera. His first short film, “3 Minutes in Lego Land,” was a stop motion thriller about a tow truck that tried to out run a train. His second short film was titled, “Another Three Minutes in Lego Land,” this time about a motorcycle trying to out run a cop.

Roth began his feature film career at the age of 16, working his way up from intern to production assistant on The Howling VI. He then interned for cinematographer, Russell Carpenter, on Jean Claude Van Dam’s, “Death Warrant.” After graduating from The University of Denver in 1993, where he studied Mass Communication and Photography, Roth moved to Los Angeles to pursue his passion for storytelling and filmmaking. In 1995 Roth opened Waterline Pictures, Inc. to facilitate his Directing and Editing of Music Videos, Commercials, and Feature Films.

In 1999 Roth produced and directed his first Feature Film, “Shot,” an urban drama that followed a photographer into South Central Los Angeles. Shot was sold to DEJ and Lions Gate in 2001 and is available on Netflix. Roth’s passion for new technology and entertainment led Roth on a six year journey to film, “The Bob Westbrook Story,” about a dying man on a quest to find a new lung.

In addition to filmmaking, Roth is also the founder of WLPGear and the creator of Movie in a Box, a full service, streamlined production solution that provides filmmakers with all the gear and know-how to make a movie from start to finish. With the introduction of Movie in a Box, Roth is single handedly changing the industry and how future films will be made.

FILMMAKERS! FOR A COMPLETE MOVIE PACKAGE EQUIPMENT, TRUCK AND DP

VISIT MOVIE IN A BOX